You are here: / tips / Can the Sofa Survive Generation Y?

With an eye always on the classic, the furniture professionals here at Fireside Furniture in New Jersey are also interested in what’s coming in the future, especially as we stock styles and pieces that we know young families will love. With that in mind, we got to talking about the differences between the furniture in our parents’ houses — boomers — and in our friends and, in some cases, even our kids’ houses. And that brought up the question: will the idea of the “sofa” survive in the next generation?

Generation Y, also known as “millenials,” have been blamed for “killing” everything from the NFL to Applebees. The past decade has seen a tidal wave of news and opinion about industries that won’t survive Gen Y, the people who were born in the 1980s and 1990s and are now becoming adults with families and children of their own. We’ve heard they will get rid of diamonds, cruise ships, breakfast cereals, wristwatches, and many more. Gen Y consumption habits have rocked many industries, but what do these changes actually mean? Is there a silver lining? 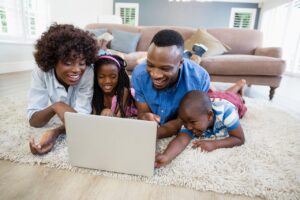 One area of concern has been whether living room furniture will be negatively impacted by changing patterns of media consumption. The entertainment center and sofa set combination was the heart of the living room up until recently, as high-quality cable shows and appointment TV dominated entertainment (think of Friends, Seinfeld, Dallas). The traditional living room set even survived the switch to streaming services, with binge-watching and HD gaming taking the place of broadcast TV. However, the recent increase in streaming services, accompanied by high-quality mobile device streaming, has led to households in which every member watches their own show, on their own device, and often in their own rooms.

So will the traditional living room survive? Is the sofa set doomed?

Not so fast! The living room isn’t going to disappear any time soon. The ability to stream content to a mobile device does not mean that home entertainment has lost its social function, and the increasing prominence of console gaming has led to renewed interest in owning a quality entertainment center. Observers of consumer habits claim that apartment-dwelling millenials prefer smaller and less expensive furniture, but this trend may be changing. Generation Y had a late start in home ownership, but they are increasingly settling down, forming families, and considering their furniture needs. A generation that struggled with recession, unemployment, and economic independence is discovering that replacing disposable dorm room furniture with durable, stylish, high-quality furniture is one way to show that you’ve finally claimed your slice of the dream.

Build Your Own Living Room

Fireside Furniture in New Jersey has some amazing pieces for your own living room, from this Four-Piece Farmhouse Wall System to this gorgeous and customizable sofa set. Have a look at our showroom on 695 Route 23 S, Pompton Plains, NJ and see for yourself what we have to offer!

Why Shop at Fireside Furniture

We will never email you more than once a week nor give away your email without your permission.